Skip to content
Welcome to the new RGL.gg Documentation website! If you have any questions or concerns, please open a ticket in our Discord!

During every competitive TF2 pug, scrim, or match, the server keeps track of all gameplay-affecting events that occur—for example, kills, damage, backstabs, healing, and ubercharges—in a logfile. The data from this logfile can be collected and presented in an easy-to-understand format. Usually, this presentation, known as a log, is hosted on the third-party website Logs.tf. Historically, other websites such as SizzlingStats were used, but they have fallen out of disuse due to a lack of maintenance and bugs.

Logs help people get their performance statistics, for example seeing how well they did compared to the other team's flank scout, or by comparing their damage per minute (DPM) against their other logs. They can be useful when addressing issues in a team's gameplay—for example, noting that a team's Medic dies way more often than their opponents' medics regardless of who won, and that they may therefore need to take better care of their Medic and protect them better.

That said, a lot of gameplay cannot be explained by logs. For example, in a game in which stalemates take up more time than team fights, players will naturally have lower statistics across the board than one in which players are constantly fighting.

Logs are half-specific, but there exist log combiners to generate statistics across multiple halves or maps; note that these log combiners may not show accurate round win data on Stopwatch maps or on games containing Stopwatch halves.

*Note that time-based statistics, like Damage / Minute, may show extreme or inaccurate values in the event of pauses, player class swaps, or other such time-altering events. 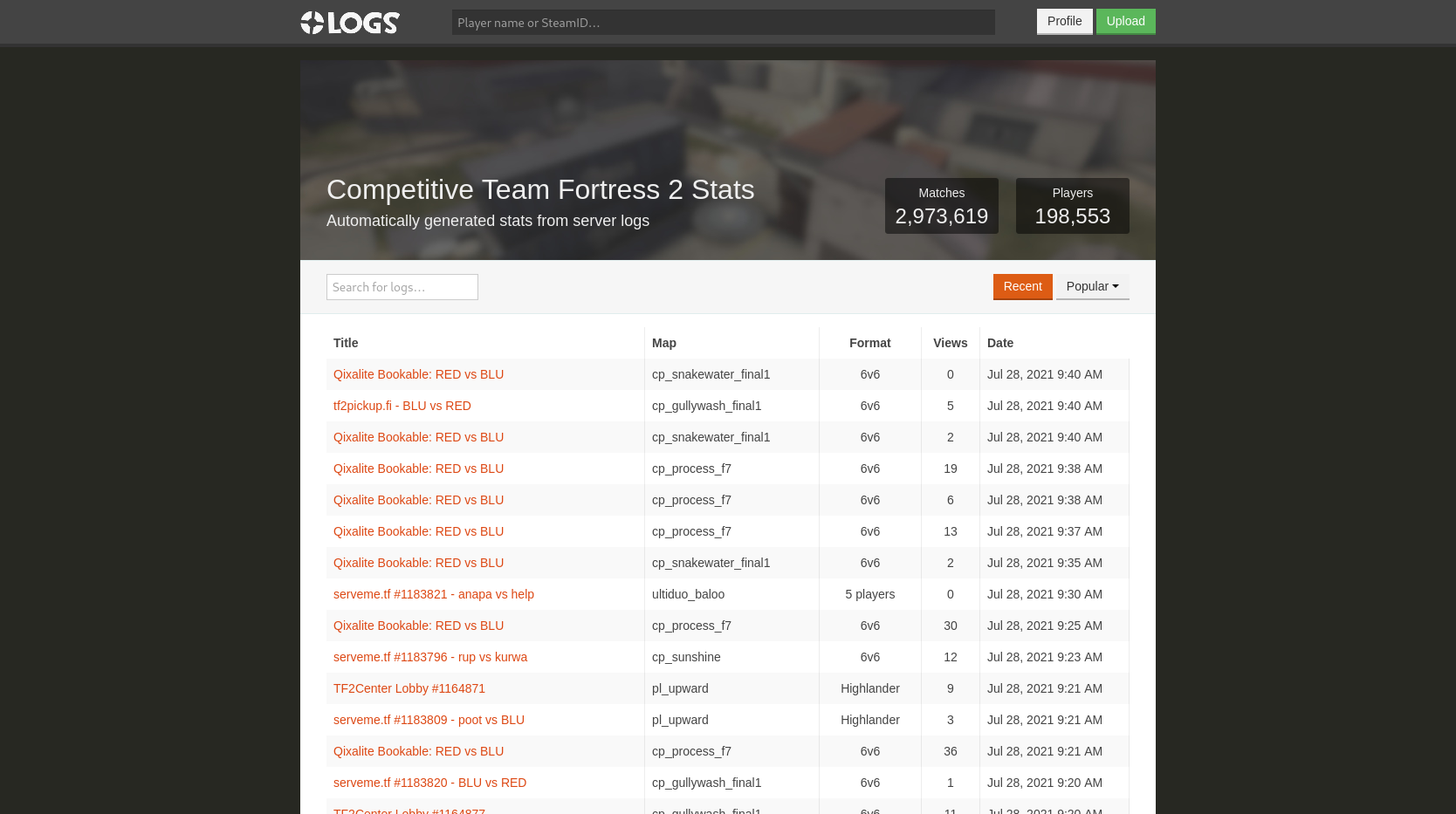 The main screen of logs.tf will show a list of all most recent logs played worldwide. In the top, you can search by player name or SteamID to find a specific player's logs. In the top right corner, there are two buttons marked "Profile" and "Upload." The Profile button takes you to your own list of logs, and the Upload button allows you to manually upload a log as well as giving you an API key to upload logs automatically. You can use these tools to view any logs as you need to. You can also download raw log files from each log page.

How to upload logs automatically to Logs.tf as a server administrator⚓︎

TFTrue is an all-in-one competitive TF2 server addon with log uploading functionalities. It is not compatible with many SourceMod plugins; if you are using SourceMod based plugins, you must use the SourceMod plugins below, not TFTrue.

Once the addon is installed, edit the tf/cfg/server.cfg file to add the following line: tftrue_logs_apikey [apikey], where [apikey] refers to the API key you get on the Upload page of logs.tf. Note that this API key is unique to each person, should not be shared, and that you must generate a new one if you do not have one. Also add the following line: tftrue_logs_roundend 1 to enable auto updating of logs after each round.

Restart the server to enable the functionality.

If there are any issues, you can open an issue at AnAkkk/TFTrue.

Please note that this plugin depends on SourceMod being installed. Refer to the TF2 Server Management guide to install SourceMod.

It also depends on the cURL extension for SourceMod, which can be downloaded from Google Code. Download the appropriate archive, and merge it with the tf/addons/sourcemod directory's contents.

With all dependencies installed, you can download the zipped logs.tf plugin from F2's website sourcemod.krus.dk. logs.tf plugin, and optionally the MedicStats and SupStats2 plugins that provide more detailed statistics in logs, and extract each .smx file in each archive into the tf/addons/sourcemod/plugins directory.

Once the plugin is installed, edit the tf/cfg/server.cfg file to add the following line: logstf_apikey [apikey], where [apikey] refers to the API key you get on the Upload page of logs.tf. Note that this API key is unique to each person, should not be shared, and that you must generate a new one if you do not have one. Also add the following line: logstf_midgameupload 1 to enable auto updating of logs after each round.

Restart the server to enable the functionality.

If there are any issues, you can reply to the F2's thread on teamfortress.tv MedicStats SourceMod plugin.